The Permanent Secretariat shares the values and vision of Mikhail Gorbachev

As a tribute to our past President Mikhail Gorbachev, the Permanent Secretariat of the World Summit of Nobel Peace Laureates wishes to share his vision and values also through this valuable interview by our colleague Livia Malcangio in 2017, one of the very last interviews that Gorbachev gave. 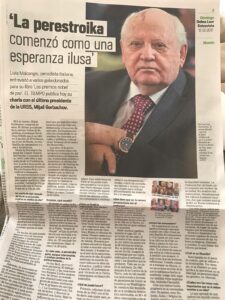 achev will be 86 years old. The last president of the defunct Union of Soviet Socialist Republics (USSR), he was born in 1931 in the village of Privolnoye in southern Russia to a family of Russian and Ukrainian peasants.

From the General Secretariat of the Central Committee of the Communist Party of the USSR (1985-1991) and then from the presidency, he played a leading role in ending the Cold War and reunifying Germany.

In recognition of his outstanding service as a positive reformer and world leader, Gorbachev was awarded the Nobel Peace Prize in 1990.

A quarter of a century after the end of perestroika, what is your analysis?

Since 1982, three General Secretaries of the Communist Party Central Committee have died one after the other: Leonid Brezhnev, Yuri Andropov and Konstantin Chernenko. The need for a generational change at the top was evident. Society wanted a change.

Indeed, a country immensely rich in natural and intellectual resources was unable to offer adequate living conditions to its citizens. An unmanageable economy and the absolute domination of the bureaucracy at every level of government hindered change. The lack of freedom was paralysing the country.

Moreover, the economy was lagging behind internationally. Growth was very low. Productivity was less than a third of western industrial levels and a fifth in agriculture. The Soviet economy was inefficient and expensive. The quality of its products was only equal to the world standards of the military industry.

The USSR’s position in foreign policy was weakening. Further postponement of change was not an option. The rest of the world also needed a transformation at a time when military alliances were at loggerheads, with a dangerous arms race (…). Perestroika and its philosophical underpinnings were an answer to all these problems.

The idea was to move towards democracy?

We started with the illusory hope of ‘improving socialism within the existing system’. But by the end of 1986 it was clear that renewal would not be possible without changing the old ways. We chose a perspective based on the principles of freedom, democracy and market economy. Its implementation was the result of harmonising private and public interests, placing the human being at the centre of development.

The years of perestroika led to the transition from totalitarianism to democracy; to political and economic pluralism; to the affirmation of the principle of freedom of conscience and religion; to the acceptance of disagreement; our country opened up to the world by adopting a law on freedom of movement, including the freedom to leave the country; the republics drafted and prepared to sign a new Union Treaty together.

The 1991 coup attempt, followed by the agreement to dissolve the Union, interrupted the perestroika process. What happened next was based on a different strategy. At the heart of Boris Yeltsin’s plan was the idea of destruction: the disintegration of the Union, ‘shock therapy’, the kind of privatisation that amounted to plundering the nation’s wealth, etc. The result was illegal capitalism, chaos and division.

In any case, perestroika won, albeit interrupted, and led to changes in foreign policy…

It was not easy, but we were patient. Dialogue was resumed and relations with the US improved. A treaty was signed that eliminated an entire category of nuclear weapons. It was the first of its kind (…). Hostility with China ceased and friendship with India blossomed. Under the influence of perestroika, deep democratic reforms were initiated in Central and Eastern Europe. The USSR assumed a position of non-interference. In the end, this allowed for the peaceful unification of Germany. At the 1989 Malta summit, the leaders of the Soviet Union and the United States declared that our countries no longer considered themselves enemies. A Paris conference of European countries adopted the Charter for a New Europe, the main points of which are still valid. The doctrines of military alliances began to change.

How was the Green Cross organisation founded and with what objectives?

When I went to the United Nations in 1988, I brought a package of environmental initiatives. One of them was the creation of a global NGO. Called Green Cross International-at my suggestion-it has its headquarters near Geneva and branches in dozens of countries. Our goal is to set in motion a change in values. Our educational programs seek to help people understand a simple truth: Man is not the master of nature, but part of it. The environment has existed for billions of years without man and could do so again. If we want to continue living on Earth, we need sustainable development.

What can be done?

First, reform the United Nations system to give it more power to act for peace. International agreements, conventions and protocols on disarmament, climate change, biodiversity, desertification and others must be ratified without delay and implemented with determination. Environmental goals must be integrated into development planning from the outset. Likewise, developing countries must be enabled to reduce their devastating debts, meet basic needs and access technologies for efficient use of materials and energy.

What does the arms race have to do with the environment?

Models developed by Russian and American scientists showed that an atomic war would result in a terribly destructive winter for life on Earth.

During the 20th century there have been many changes. At the beginning of the century, the annual gross product created by all countries was $60 trillion. Today, 60 trillion are produced every day. Imagine the overload on the environment, the heat and waste produced. All this has already damaged the environment. In 1992, after the Earth Summit, more than 100 scientists (including dozens of Nobel laureates) gathered in Washington. Their verdict was ruthless: if the destructive trend continued, irreversible changes in the biosphere would begin in 30 to 40 years, and it is already 20. If current processes continue, the environment will change and we, the human species, will have to mutate or die, like so many other species.

Despite this, not many politicians are as sensitive to the problem. When did you realize that our environment was so threatened?

My experience with the environment began when I was a child. I grew up in a farming family and saw how our wheat crops suffered from a sandstorm or erosion. I saw the effect of these things on human life. As I went on, I saw other things that made me think. When I started working in Moscow, I saw a terrible picture of what we have done to the environment. Then I had to deal with many other experiences, including Chernobyl.

I think we have made progress in raising awareness. In countries like the Netherlands, Switzerland and Belgium there have been changes in legislation and in the behavior of companies and people. A lot has also been done in the United States in recent years, although pollution is still excessive.

What values are dear to you?

As a young person, I took communist ideals to heart. A young soul cannot reject the justice and equality propagated by communists. But that terrible experiment led to the repression of human dignity. Violence was used to impose this model of society. In the name of communism, we abandoned basic human values. So when I came to power in Russia, I began to restore them.

Life has value for its own sake. No “progressive” method is acceptable if it destroys life. I believe that the 21st century must be the century in which human beings live in harmony with nature instead of being slaves to technology.

The future will depend on the ability to find a synthesis between ecological, liberal and social values, what I call “the perennial values.”

What is your philosophy?

It is based on common sense, which is about moderation. For example, if freedom is not linked to morality, it is not freedom, but permissiveness; it is selfishness, not freedom.

What are the most important things to teach a child?

What I learned from my parents was common sense, which is typical of peasants. They have a sense of nature, of the cosmos, of real life. I also learned humility. There is a lot of work in rural communities, which leads to tolerance and solidarity, and this was something I experienced and has stayed with me all my life.

What are your beliefs?

Well, I believe in the cosmos: we are all connected to it. So nature is my god. Trees are my temples and forests are my cathedrals.

What does love mean to you?

Love is a mystery of nature. And I think it’s good that it is. First of all, for me love is what unites a man and a woman. And it also unites man and nature. It is too big a mystery for us. Once you try to define it, it is over. It dies as soon as you think you know its secret.

The world-wide known daily newspaper ‘El Tiempo’ has also shared it Spanish some hours ago: https://www.eltiempo.com/mundo/europa/entrevista-de-livia-malcangio-con-mijail-gorbachov-57217