Leave Your Mark for Peace 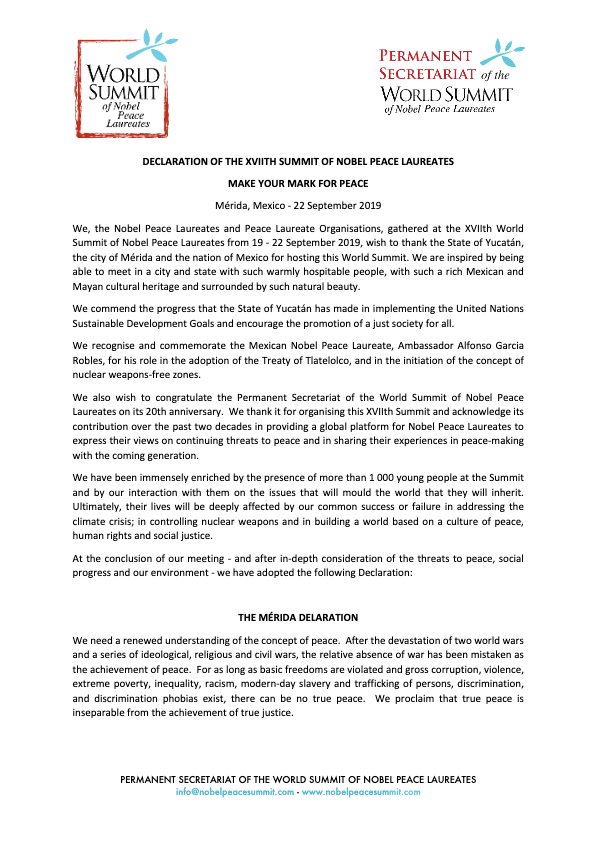 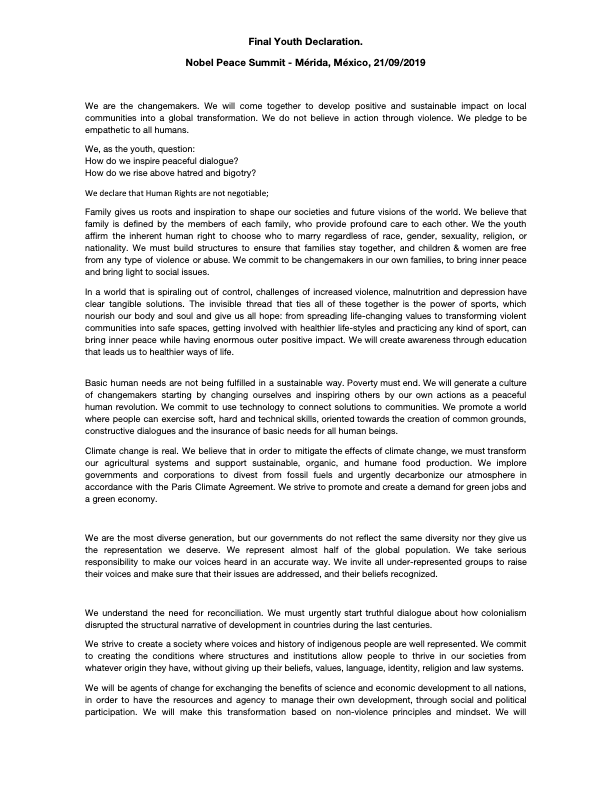 Yucatan Declaration for a culture of Peace 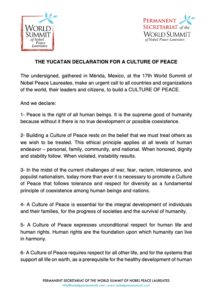 Statement on Danger of Nuclear war 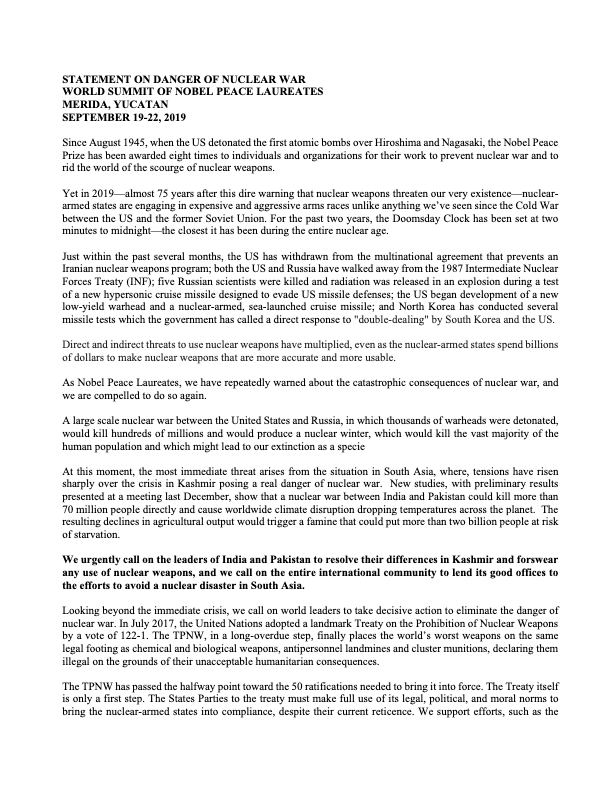 The World Summit of Nobel Peace Laureates in Mexico highlighted the 20th anniversary since the 1st Summit was launched in Rome in 1999. The meeting that started as a great idea of President Mikhail Gorbachev by gathering his fellow Nobel Peace Laureates and around a 1000 people during the first version in 1999, has grown considerably. Throughout the years, around 75000 people have attended the Summits all over the world. Since the launch of our youth program, “Leading by Example”, in 2012, we have encouraged 4500 youth to create and develop their own projects for peace at community level, which has been supported by numerous partners, whose number has reached 145 universities and international organizations; and our most recent achievement being the creation of the Peace Curriculum at Universities that has already started to be implemented in partnering universities.

The title of the 17th World Summit of Nobel Peace Laureates was “Leave Your Mark for Peace.” The program was focused on both the Mexican legacy and the nation’s involvement in the global peacebuilding process. The program engaged civil society and youth from throughout the world by providing them the tools and strategies needed to achieve peace at the local and global levels.  Given the location of the Summit and its proximity to a historic legacy, as well as the home of many indigenous peoples, the Summit addressed the needs of Native Cultures of the Americas, especially the Mayan. The Maya culture has stirred many of us to a new relationship with the Earth. In the words of Nobel Prize Winner, the Dalai Lama: “Education needs not only to develop our intelligence but also to support the basic human values of warm-heartedness and compassion.” This year, the Summit has dedicated much attention to promoting peace education among younger generations.

The “Leading by Example” program is the official youth education initiative of the World Summit.  The program presented a new concept, titled Youth Peace Labs to promote opportunities for self-expression and collaboration among the university students and young professionals in attendance, to build a culture of peace on their campuses and within their local communities.

The Summit in Mérida achieved an exceptional confirmation rate of distinguished attendees, with 30 Laureates, prize-awarded organizations, and Peace Laureate Foundations confirming their attendance. 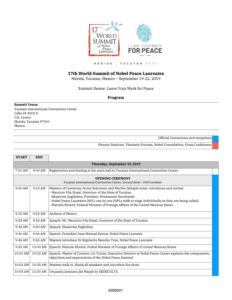 The 2019 Peace Summit Award was presented to Puerto Rican-born global superstar Ricky Martin who has been a passionate philanthropist since he began his pop career aged 12. The winner of among others, the Hispanic Heritage Award in 2002 for his humanitarian work, he was appointed as a UNICEF Goodwill Ambassador in 2003. His life-changing work continues with the Ricky Martin Foundation, which advocates for the wellbeing of children around the world.

LEAVE YOUR MARK FOR PEACE

The Leave Your Mark for Peace Award in 2019 was given to Jose Manuel Diaz Rubio, a Yucatecan businessman and promoter of the Zamná Messenger of Peace project. 40 years ago he dedicated himself to port development and promotion of the national merchant marines. He is known for his philanthropic projects and educational initiatives, the most recognized of which is Zamná Messenger of Peace. Zamná is a sailing boat that cruised for five months between the American and European continents to bring a message of peace.

The Peace Summit Medal for Social Impact was presented to Spanish singer and songwriter Miguel Bosé, who rose to fame with his albums Bandido (1985) and Papito (2007). Passionate about ocean conservation, Bosé has used his celebrity status to support this cause. Honours for his work and activism include the Latin Recording Academy 2013 Person of the Year, among others. He is also the Honorary President of Fundación Patrimonio Indigena, which promotes the support of indigenous communities. Miguel Bosé continues to actively work on his musical career and philanthropic contributions.

Mary Shuttleworth and Youth for Human Rights have received the Peace Summit Medal for Social Activism Award in recognition of their work to educate the youth of the world on the importance of human rights, through the Universal Declaration of Human Rights. The organization, Youth for Human Rights, has distributed more than 9 000 000 booklets on the Universal Declaration of Human Rights in more than 190 Countries. Their human rights videos have been played on local television stations in 27 Languages. Youth for Human Rights has conducted programs under the guidance of Nobel Peace Prize laureates José Ramos-Horta in Timor-Leste, Oscar Arias Sanchez in Costa Rica and Archbishop Desmond Tutu in South Africa, and many other locations around the world.

For the first time in the history of the Summit two Prizes were given to the youth delegates, participants in the Leading by Example youth program. Each prize carries a check of US $10 000 for the young person who has submitted the best idea to promote social change at the local or global level. In 2019, the Permanent Secretariat, together with the local host committee, had received an unprecedented 71 applications from the youth.

The Turner Prize for Social Change, supported by the Ted Turner Family Foundation, was awarded to a young person from the international community. Mohamad Aljounde has been a volunteer activist since the age of 12. He and his family decided to support Syrian refugee children who do not have access to education, through establishing a school called “Gharsah”. During his years of activism he has observed children who were forced to drop out of school in order to support their families financially. This project supports Syrian children who have dropped out of school by promoting education and providing clothing and necessary materials for them to achieve success in their lives.

The Preemptive Love Prize for Youth Activism, supported by the Preemptive Love organization, was awarded to a young person from the Mexican community. Saskia Nino de Rivera seeks to improve the prevention of crime and improvement of security in her home community. She seeks to break the cycle of violence in Mexico by working with the penitentiary system and prison population through tailored interventions and reintegration processes. Her noble goal is to build a safer Mexico where all can live and succeed.