Stand in Solidarity for Peace
Time to Act 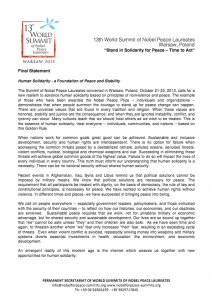 For the first time in its history the World Summit of Nobel Peace Laureates was held in Central Europe. The message of “Solidarity”, a driving force behind the peaceful change in Poland and Europe, has been the point of reference for a debate on global development, aptly described in the Summit’s motto “Stand in Solidarity for Peace – Time to Act”. The Warsaw edition marked 30 years since Poland’s Lech Walesa won the Nobel for leading the Solidarity trade union, which negotiated a peaceful end to communism at home in 1989. The City of Warsaw has been the perfect venue to develop the participation of young people to the Summit, which started in Rome and continued in Berlin, Hiroshima and Chicago with constant growth of youth involvement each year. The direct messages of all the Nobel Peace Laureates have been for these young people an opportunity to understand how the role of each of us is important in building up a world without violence, wars and a future of peace.

The City of Warsaw is the capital of Poland – a country located in the very heart of Europe. It is a city with over 700 years of rich history. Demolished in nearly 85% during the Second World War, it rose like a phoenix from the ashes thanks to the efforts of the entire nation. After 44 years of communist rule this is where the breakthrough events initiated by the ‘Solidarity’ took place, leading to the Round Table talks, the first free elections, and system transformations in Eastern Europe. Warsaw is the city of free, independent and creative people representing various outlooks and cultural or national backgrounds, who over centuries developed it, defended it and fought for the democracy. Thanks to that today it is a city in which you can express your opinions, participate in social and political life, and build a dynamic, contemporary capital with its unique atmosphere.

The Lech Walesa Institute Foundation is an apolitical non-profit, non-governmental organization founded by President Lech Wałęsa in December 1995 as the first such institution in Poland. It focuses on the following goals : to record the life and activity of Lech Wałęsa, to promote a positive image of Poland and the Poles abroad, to protect national heritage, the tradition of independence and solidarity, to advocate clear and transparent rules in politics and public activity, to protect human rights and support democracy process in societies, to promote dialogue between different cultures and different religions and to support young people in acquiring the highest possible education.

The Permanent Secretariat of the World Summit of Nobel Peace Laureates

Sharon Stone has been chosen as t 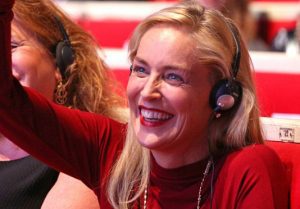 he Peace Summit Award 2013 Laureate recipient. The Award is bestowed for her activities that brought solidarity and new hope to the millions of people who have fought and are fighting against the tragedy of HIV / AIDS. She stressed that AIDS remains a vast challenge across the globe.

“I can tell you that now that we have drugs, we have still lost 40 million people to AIDS. There were times when the burden of that felt like I was going to fall on the floor and never get up again …I can tell you how much good work we have done. We have changed the face of AIDS, but still one child dies every other minute. I want you to think about how many children have died since we came here this morning, and I want you to feel the weight of that upon you. Because until we a raise every border of prejudice, every border of inconsideration and until we use every bit of who you are and who you are meant to be, until you stretch yourself out to the boundaries of greatness of your own perfection the puzzle peace of humanity won’t fit together perfectly and there won’t be an end to hatred and to disease. I ask you stretch yourself, stretch yourself completely and end the pain. Thank you so much for acknowledging me today, I cannot tell you how proud I am.”
– Sharon Stone 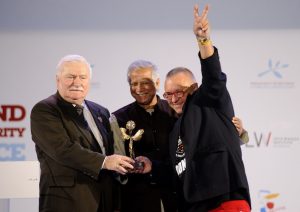 Jurek Owsiak is the recipient of Peace Summit Medal for Social Activism 2013. The Award was presented ‘in recognition of a long-standing social and charity activism as well as of dynamic help to the development of Polish medicine.’

The Foundation Owsiak established has for over 20 years been transforming the face of Polish healthcare; over that time, it has equipped hospitals with more than 20,000 medical apparatuses totalling almost $ 140 million.

It all started when in the course of his TV show ‘Do As You Wish’ Owsiak encouraged his viewers to support a foundation raising money for medical equipment and based at Warsaw’s Children’s Memorial Health Institute. This resulted in the first WOŚP Grand Finale on 3 January 1993. In March 1993, the Great Orchestra of Christmas Charity (WOŚP) Foundation was registered.

‘Earlier we had not even thought of establishing a foundation. When we invited people to attend the first Finale, we thought it would be just a single happening and great fun meant to yield some measurable benefits. How big benefits? Nobody really anticipated. The first successful Finale allowed to share the raised funds among all the children’s cardio-surgery centres’, says Owsiak.

One of the recollections Owsiak often reminds of is the 1st Finale when a woman approached him in the TV studio, took a wedding ring off her finger, and said that it had belonged to her late husband. ‘She was in that studio with a disabled daughter. They did not seem extremely well off….I was totally taken aback when she was handing that ring to me. I didn’t know what to say. It was all wonderful. At that moment what mattered most was not so much the money value, but the emotions’, he explained, as at that point he understood how important that fundraising action had become.

Since 1993, the Foundation has annually been fundraising with a specific previously identified medical goal. It regularly plays in early January, enjoying the commitment of thousands of volunteers and encouraging millions of Poles to generously donate. In January 2014, WOŚP will play for the 22nd time.

Owsiak is a volunteer for the Foundation serving as its President of the Board. Apart from that he is a radio and TV journalist, and he also runs his daily videoblog at http://owsiaknet.pl/channel/blog. Moreover, he is a stained glass maker and a licensed psychotherapist.

He graduated from an Economic Secondary School; he also unsuccessfully tried to follow some artistic studies, as well as such University departments as philosophy, rehabilitation, and psychology.  In the late 1970s, he got a permanent job for a stained-glass studio where he became a guild licensed master stained glass maker, after which he set up his own studio, launched notoriously on 13 December 1981; he ran it until 1994 at which point he passed it over to his brother Andrzej.

Owsiak has run several radio programmes, while as of December 1991 he also held his public TV show titled ‘Do As You Wish’ which was a rock-and-roll show, changing its name twice in the following years. He is currently focused on the www.owsiaknet.pl videoblog, though he continues to meet with the listeners at 10 PM on Wednesdays on Programme III of the Polish Public Radio.

In 1991 and 1992 together with Walter Chełstowski he ran the Jarocion Festival. In 1995, he organized the First Woodstock Festival which since then has become the largest open-air rock event in Poland and Europe.

Owsiak is married with two daughters: Ola and Ewa, his wife Lidia Niedźwiecka-Owsiak serving as the WOŚP Medical Director.