The Youth Program of the Nobel Peace Summit “Leading by Example” Welcomes Over 1,000 Students This Year

This year the number of youth delegates participating in the Leading by Example program of the World Summit of Nobel Peace Laureates has reached a record of more than 1,000 students from top universities of Mexico and other countries throughout the globe. It is the highest number of participants in the youth program since it was launched in 2012. The past Summit in Bogota had gathered 600 young people from all continents while the first edition of the Youth program in Warsaw welcomed a humble yet inspiring 200 students. 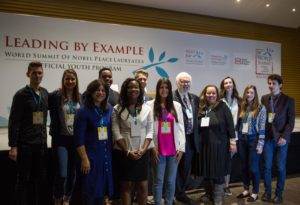 The youth program of the Summit this year has been extensively broadened by the new concept of PeaceLabs. Offered each day of the Summit, the various PeaceLabs are tailored to produce projects and methodical action plans related to global peace that will be possible to implement at the local community level by participating youth delegates. In addition to the PeaceLabs, in traditional fashion, the program will also include a diverse array of workshops led by the Nobel Peace Laureates and Prize awarded organizations as well as those conducted by other recognized leaders and peace activists. 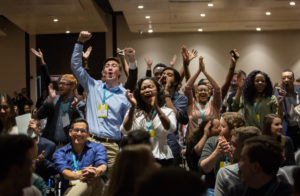 The workshops of this year’s program will cover a wide spectrum of topics including essence of being an active global citizen, strategies to promote peacebuilding at the local and global levels, preventing violence through diplomacy, the importance of cultural heritage and embracing others, the role of young activists in a modern world, and the ethics of leaders, among others. Workshops are being offered by both local leaders from Mérida and Mexico, as well as international leaders from around the globe.

Director of the Youth Program, Leading by Example, Viktoria Devdariani states: “We express our special gratitude to our partners in Mérida who have shared a lot of inspiration and practical ideas for the program providing us with several inspiring workshops that combine the unique and colourful culture of the state of Yucatan with the needs and topics that move us forward to a more peaceful society.”

President of the Permanent Secretariat of the Summit, Ekaterina Zagladina notes: “We believe that today we shall work on educating the new leaders and increase opportunities for young people to use their emerging talents for peace and sustainable development. In the second consecutive year in row we are pleased to offer the Turner Social Change Prize for $10,000, named in honor of the Turner Family, which will be awarded to a youth delegate or shared between several delegates with the best idea to affect change within his or her local and/or global communities. The award is presented to the winning youth delegate or several delegates at the closing ceremony of the World Summit of Nobel Peace Laureates.”

The Permanent Secretariat’s Youth Team works diligently with colleges and universities all throughout the world to implement a curriculum in which history is told from the lens of peace. This work includes the implementation of a special curriculum created by The Permanent Secretariat’s Members and approved by Nobel Peace Laureates, as well as through the impressive book which tells the courageous lives of Nobel Laureates, Being Nobel, authored by Permanent Secretariat member, Livia Malcangio. This fascinating and informative book recounts the gripping stories of recent Nobel Peace Laureates and other extraordinary personalities, all committed to a future in which equality and freedom from oppression are the rule, rather than the exception.