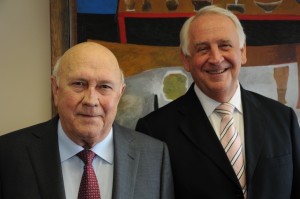 Mr. Dave Steward was educated in Canada, the UK and South Africa. He was a diplomat (1966-1985) serving as Ambassador to the UN in 1981-1982.  He headed the SA Communication Service from 1985 until 1992 when he was appointed Director-General in President FW de Klerk’s Office where he was closely involved in South Africa’s constitutional negotiations. In 1998 he co-authored De Klerk’s autobiography “The Last Trek” and in 1999 established the FW de Klerk Foundation together with the former president.  He served as Executive Director until June 2016 and is now the Foundation’s Chairman.